Yesterday, I walked around Battery Park and the World Trade Center site to see what was there to commemorate the tenth anniversary of the September 11 terrorist attacks.

The day started off cloudy with a threat of rain, but cleared up by the time I got downtown.

What I saw was an interesting juxtaposition of remembrance and renewal. 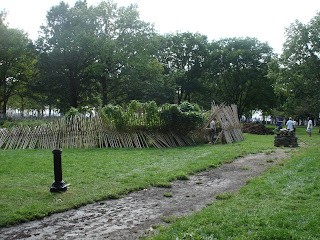 An urban garden being planted in Battery Park 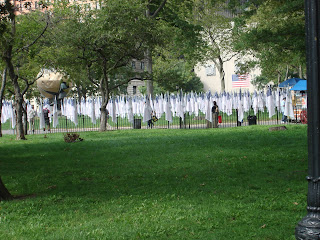 The commemoration in Battery Park was the "Remembrance Field of Honor",
a field where each flag represented a life of someone who died in the attacks. 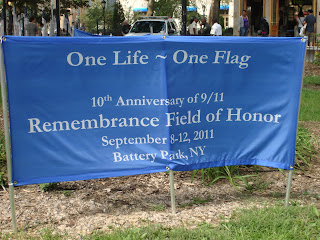 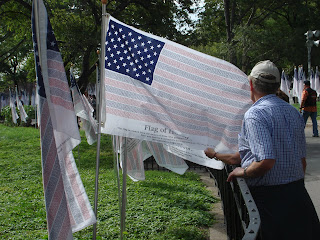 The stripes of each flag consisted of the names of the deceased. 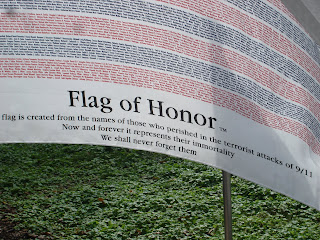 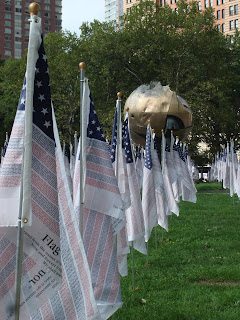 In the background is The Sphere,
a sculpture that once stood in the plaza between the Twin Towers 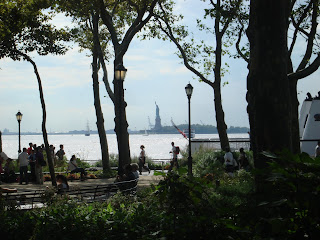 Lady Liberty and tourists heading for the ferry to Liberty Island 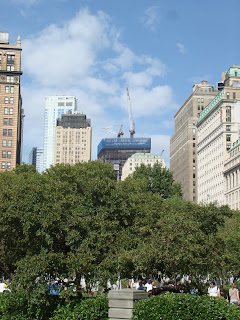 After leaving Battery Park, I walked north towards the World Trade Center.
In the distance is the skeleton of the new 1 WTC, the "Freedom Tower". 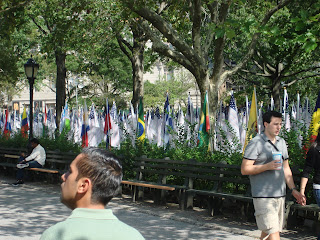 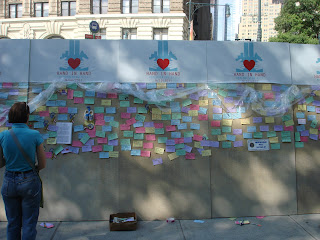 Just outside of Battery Park on the north sidewalk was a remembrance wall constructed by Manhattan Community Board 1, as part of their "Hand in Hand" remembrance.  Cards were left so visitors could post messages on the wall. 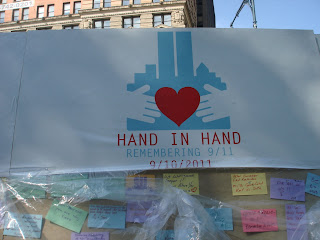 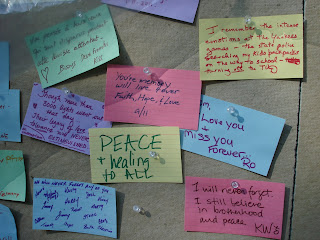 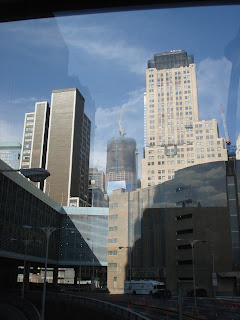 Freedom Tower, and hey, my old apartment building on the right! 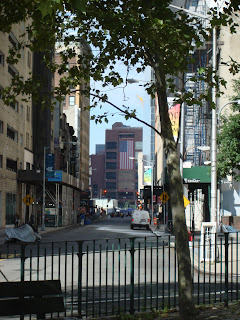 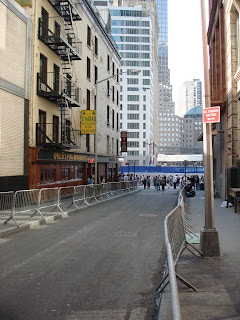 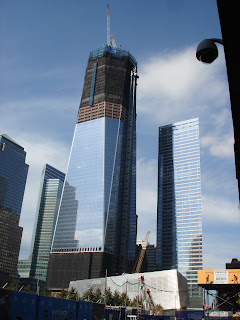 At the WTC site.  The Freedom Tower and Number 7 World Trade Center.
The Freedom Tower sits atop what is essentially a block of concrete that is intended to protect against attacks to the base of the building. 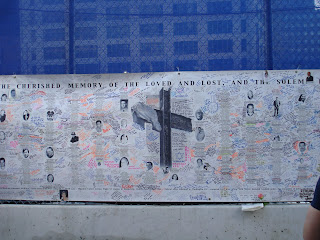 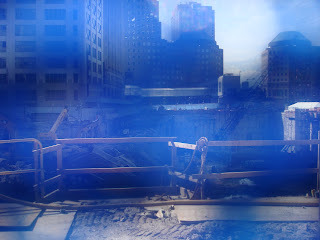 A look through the "looking glass" (really a blue netting surrounding the construction site)
at the pit that still remains, ten years later.
At least the rebuilding finally seems to be underway in earnest. 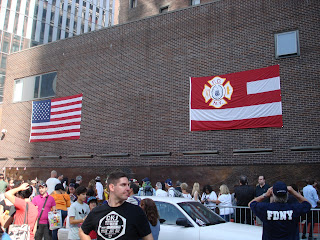 Behind the firehouse for FDNY Ladder Company 10, where a makeshift memorial to the firefighters who lost their lives that day is erected.
To my knowledge, the official memorial will not pay special mention to the firefighters and police officers who dies in the rescue effort.
Politics... 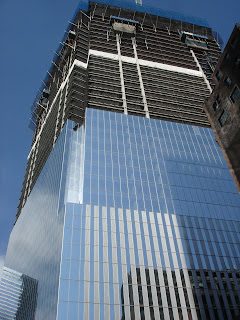 Another of the new World Trade Center buildings (not sure which this is). 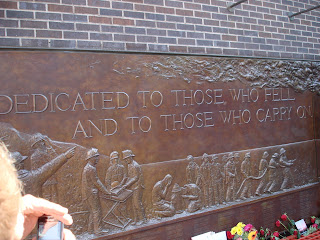 Remembrance - memorial on side of Ladder Company 10 firehouse 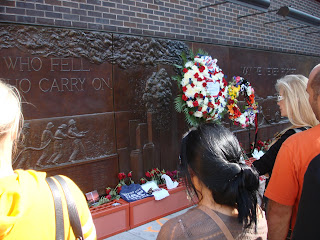 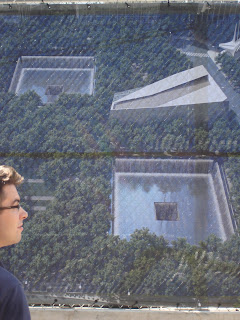 Here's a depiction of what the finished memorial will look like.
I'm not a fan - it looks too empty, like a gaping scar, or a sign of defeat.
The original World Trade Center was a place of vitality and life, of the hustle and bustle of commerce and people trying to better their lives.  I wish the memorial design had paid more tribute to that.
Also, if we're just leaving the holes in the ground, why has it taken over ten whole years to finish? 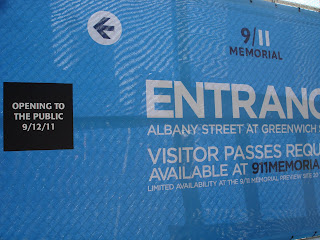 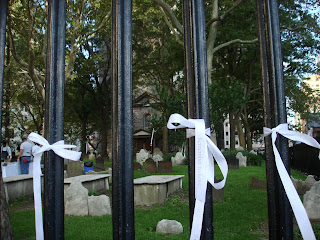 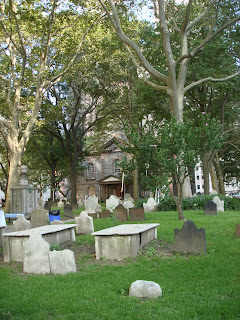 On September 11, 2001, this courtyard was filled with rubble, debris, ash, and smoke from the attacks. 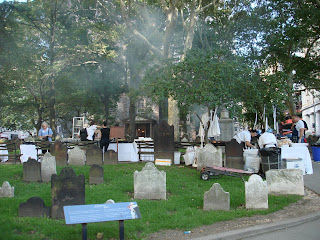 Now, ten years later, it is filled with smoke from a different source - a cookout.
**********
So it's been ten years.
I still remember waking up that day, around ten to 9, and running into my roommate Paul in the kitchen.  He was on his way to class.  "Hey, you have a TV, right?  You should check out the news - some idiot crashed a small plane into the World Trade Center."  Hearing this, I took my bowl of raisin bran into my room and flicked on my 13" Hitachi to Fox 5.
I munched on my cereal thinking about the day ahead, only half paying attention to the talking heads jabbering in the background.
Then the second plane hit.
That's when I knew.  I think that's when we all knew.
I quickly dialed my parents in Hawaii, thinking that the phone lines would soon be jammed.  I remember waking them and telling them to turn on the news.  I remember speaking to them for the next two hours, with my eyes glued to the TV and my fingers frantically changing from station to station.
I remember Paul coming back to the apartment, shaken, saying that classes had been cancelled and that he saw the tower collapse.
I remember walking around the neighborhood.  I remember thinking it was like a post-apocalyptic movie, where people were walking around dazed, or huddled in small circles around TVs and radios, or telling each other the latest reports and rumors.
I remember the rumors - the White House was attacked, a bomb went off in front of the State Department, new rumors were born by the minute.
I remember that I had a job interview on the 86th floor of one of the towers scheduled for the next day.  I remember trying to see if that law firm made it out okay.  By a stroke of serendipity, I flipped onto a station at 3:30 pm that afternoon - they were interviewing an older gentlemen from that very law firm - he was in the tower for the 1993 bombing, and the second he heard that the first plane hit, he gathered everyone and evacuated the building.  They had made it out.
I remember seeing the fighter bombers flying overhead.  I had never seen one in flight before.
I remember us trying to donate blood at the nearest hospital, thinking at first that we had to do something to remove the feeling of helplessness, but then, as the feeling turned to one of duty and resolve, simply that we had to do something.  I remember the line being six blocks and four hours long.
I remember the candlelight vigils, the memorial Masses, the email listservs soliciting and organizing help for the relief effort, the bulletin board at the NYU gym where requests were posted for the students whose downtown dorms were evacuated.
I remember thinking about my brother Eric, who had finished basic training for the Marines but a week beforehand, and wondering what was to come for him.
I remember that for a few weeks, the city seemed subdued - dazed, in shock, saddened, and alert.  I remember wondering when that feeling would end.
...and I remember when I was on the subway in late October when a man was trying to hold the door open for a woman running towards the train.  As she got on board, she turned to the man and berated him, "stop holding the door!  The train won't move!"  His response?  "I was trying to be a gentleman, you MORON!"
...at that point, I remember knowing that New York City would be fine.
**********
P.S., God works in mysterious ways.
The Gospel at Mass today, September 11, happened to be where Jesus told Peter that he had to forgive, not just seven times, but 77 times.
Forgiving the petty slights we receive in our daily lives is tough enough - how do we forgive the most horrendous acts?  Why does God, who loves us unconditionally, allow them at all?
Back in college, I gave a lot of thought to theodicy - the problem of evil and its existence - or why does bad things happen to good people in a world with a loving God?  The only thing in the Bible on the point, the Book of Job, is unsatisfying, basically God saying "who are you to question me?  You don't know what I do.  Here, let me give you a new wife and possessions."  Neither is the view that without evil and suffering, we wouldn't appreciate goodness or happiness - that's a crock and is refuted by observation.  Look at an infant who coos happily when receiving the loving attention of its parents - it knows it is happy.  Does it need to be beaten so it truly appreciates the good times?  After much thought, I came to the view that evil is allowed because we are afforded free will in our individual lives.  However, it does not mean that God abandoned the world.  We can choose good as well as evil.  And while God allows free will in our individual actions, the rules of the cosmic game are ultimately rigged to result in a final outcome that serves to glorify God and bring us closer to him.  Maybe forgiveness is a correcting mechanism that keeps the universe heading toward that outcome.
In the past, I prayed for peace for the victims and their families, and for justice for the perpetrators.  I think I'll start praying for mercy instead. 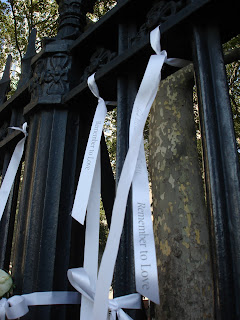